At the end of a long hard day working/playing/studying, there is no more satisfying activity then to soak in a hot bath and maybe have a candle or two to relax.

When those wicks are lit, a mini wind storm is being born. Convection is the principle that hotter air always* rises (being less dense) and cooler air always* (being more dense) falls. 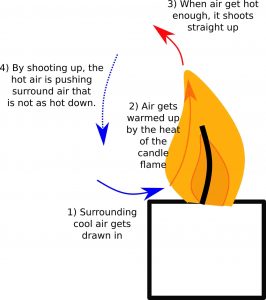 This cycle does not stop until the flame is put out.

In the video game “The Legend of Zelda: Breath of the Wild”, convection is used to allow a paraglider to go up instead of down.

If an open paraglider strays above an open fire, e.g. grass fire, the glider is caught above the stream of hot air from the fire that wants to go straight up. This in turns push the glider upwards, instead of down with gravity like in other parts of the game.

In fact, a lot of weather patterns in the world is due to difference in the temperature of air. A classic example of the this is storms where cold meets warm air. The ensuring storm is from hot air’s scramble to go up, while the cold air tries to get as low as possible.

Next time when you lay back in the bubble bath, you can take satisfaction at the wind storm that your candles are creating.

The rise and fall of air is actually related to gravity. Without gravity the principle of convection actually do not hold strictly true. NASA has conducted a series of experiments in space in that this law gets messed up where there are next to no gravity.

This is an unpaid post. We do not have any affliation with Nintendo, NASA or National Candles Association.

Zelda Breath of the Wild: How to Create Updrafts