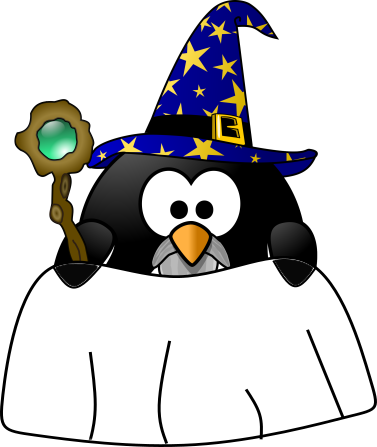 As witches and wizards fly around this time of the year, I got to thinking about the genius that is J. K. Rowling in inspiring kids of all ages to read (me included!).

One of my favourite device in the books are the invisibility cloaks. Scientists have actually been having a go at this for ages. To my delight, I recently discovered that a team at University of Rochester have put together a cloaking device that can be made without electronics, by using simple behaviours of light.

Let’s take a step back, and look at what is light. Light is a ball (or a burst) of energy from any source (e.g. sun, computer screens, lamps) that our eyes can see. When our eyes see how the light ball get stopped, we interpret it as an image in our brains (how eyes see images: subject of another post).

The light ball travels from the sun through space in straight line and hit the first solid object that it encounters. 99% of the time this will mean that it gets stopped (much like a person running into a wall). This can be seen as a shadow.

However there are certain substance in our universe that has special properties. Rather than stopping the light ball dead, a mirror reflects the ball like a trampoline. It bounces off the mirror and travel in the new direction – until it meets the next solid surface where it will stop. 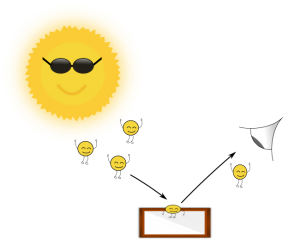 And there are lens (like in your glasses) where the light get to pass through but get slingshot around into a slightly different direction. This is like a detour around a traffic accident on a straight highway. Instead of cars travelling in a straight line, the cars curve around until it goes back to the road where it normally goes before hitting our eyes.

So how do invisibility device work then?

Invisibility cloak work by using the principle of bending the light. It uses a set of 4 lenses. As light pass through each lens, the path of the light get slightly altered. Until it creates enough space in the middle that a solid object like a hand can be placed in the middle without stopping the light getting to your eye.

But when you see the image through the lens, it looks like the hand is not in the middle. That is because our eyes are programmed to see anything that enters are eyes as if its straight in front, as it doesn’t know about the bent around path.

Kudos to the team at University of Rochester for using the KISS principle and thinking outside the box.

Thanks to the people who have already backed us!!! There is still some Early Bird rewards available. Get it before you miss out.